After a full summer of biking and camping, I had a chance to head out for my first solo bikepacking trip of the season. Asking really nicely my wife's permission, off to the Sunshine coast I went for what turned out to be a fun overnight trip. 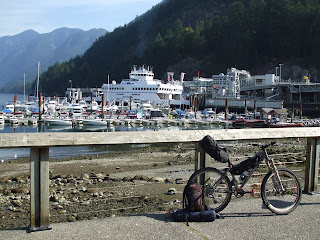 I always like the ferry, especially when I take it with my bike. It feels like I'm heading to a far away land. Ok, the ferry ride is only 45 minutes, but still, it feels like it :). I seem to always meet cool people when I'm on the bike for some reason; not sure why. This time I met a para-glider heading the same way for a flight somewhere on the coast. Talking to him for most of the trip and exchanging adventure plans, we realized that we knew some of the same people!  Funny how it's such a small world... 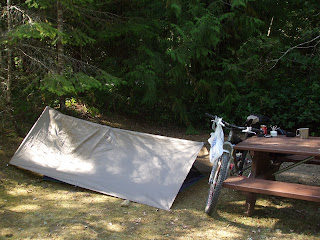 Once on the other side, I rode an easy 30 km on the road to Porpoise bay campground but first stopped in Sechelt to buy food for that evening. Once at the campground, I set up my tent, and since it was still fairly early, I went for a walk around the park. I had been there in July with my family. It made me nostalgic for them, but only for a quick minute. 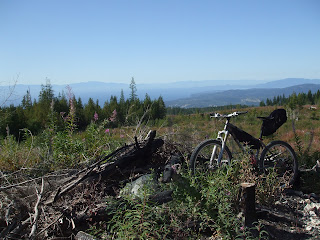 The next morning I was up a bit late, since I had such a good sleep I couldn't get out of the tent, I was just too comfortable. Finally, I got my lazy ass out of bed, made breakfast, packed up and headed for the hills. As usual in BC, the start of a ride is always a grind up; to the heavens I went... 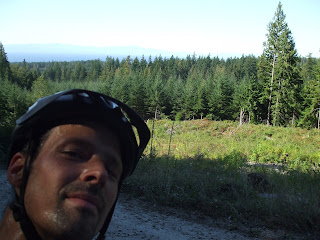 It was hot that day and most of the climb was exposed, so needless to say, I was sweating. It was a fairly mellow pace, with the hardest part being avoiding the bear crap all over the place. Those bears eat a LOT of blackberries! I'm sure they where craving for meat... luckily I never saw one! 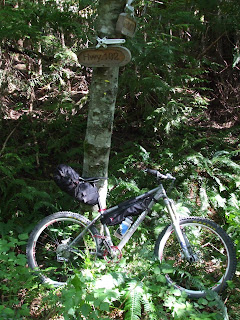 The Sunshine coast has a lot of trails that go in every direction, so it's easy to get lost or miss a trail head. You need to bring your A-game for navigation here. It's easy to take the wrong turn, but just remember if you're lost, just head south and you'll hit the road eventually - hopefully... 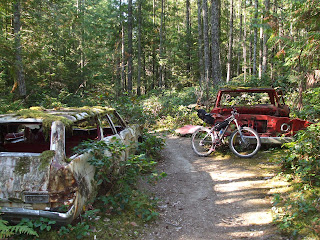 The trails are pretty typical for BC south coast, but one section that was really cool was a car graveyard I stumbled onto. I didn't expect that! It was kind of cool weaving through trees and old cars at the same time. First time I've done that. 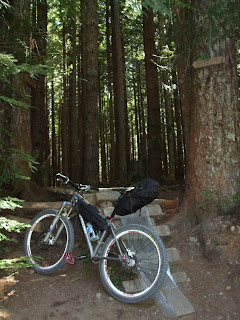 The point of this trip was really to test my bikepacking gear on real trails, and it was a good opportunity to test it out in preparation for next year's big epics. I was surprised how well my Revelate bags held up to the task. I can honestly say that in most sections of trail I could hardly tell they were there. The only time I wished I didn't have them was on steeps. Those where pretty sketchy, I just couldn't  get back far enough and had a few close calls. 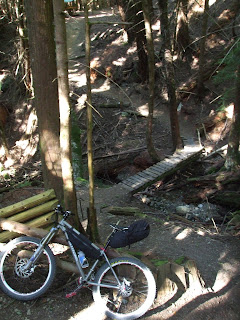 Now it was back to Langdale to catch the ferry home after riding solo in the hills for over 5 hours from Porpoise bay, all in the bush. How cool is that?! Way more fun than taking the road that's for sure. If any of you ever want to hook up or need a guide, I'm always keen. Hopefully I still have time for one more big ride before the season is over. That's if work doesn't get in the way...
Posted by Nick Lemmel at 8:37 AM