We cheated, yes we did and we loved it!  Finally I'm back on the chairlift after a few years off. Let me explain a bit for those of you that don't know. I used to be a very different kind of rider, a bit of a bike park addict. My definition of epic back then was big jumps, drops and speed. Visiting the ER at least once a year was the norm. My last visit to the ER changed a lot of things. I had a one and a half year old at home and another a few weeks away. Lying on the ground wondering what the hell had just happened (I'll spare you with the details; maybe another time) gave me time to think things through. In the end I was lucky: three days in the hospital, 10 pounds lighter, 24 screws and 2 plates holding my leg in place. Man that was a close call! Needless to say, putting my bike on the Whistler chairlift gave me some flash backs. 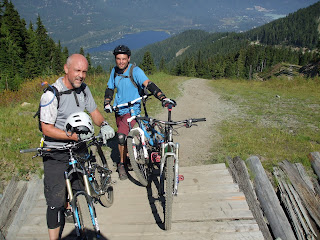 This ride has been on my to do list for a long time. Always a good excuse/reason not to do it and it almost happened again this year due to a bad back. But on that day, all the stars lined up perfectly and after a short ride up, thanks to the Whistler chairlifts, we were on our way up to ride the classic epic descent. 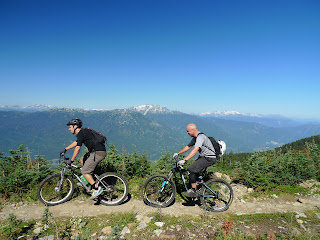 Once on the top of Garbonzo you have to ride down in the park for a bit to access Highway 86, which leads you to the trail head that's about an hour climb away from there. The climb at times is fairly steep but we can't complain, in the old days you had to ride up from the village far bellow; now that's a climb! 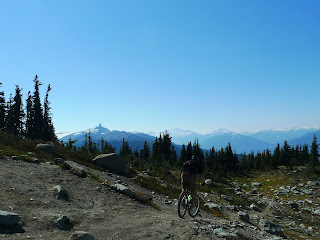 This is a long downhill, it consists of three different trails: Khyber, Babylon by Bike and Tunnel Vision. The start of Khyber is a steep eroded mess, but fortunately it's over fairly quickly. This is when we realize that a new reroute trail has been built. Damn! Next time. The alpine portion is not all that long. You're soon in the trees on decent single track. Most of Khyber is pretty good but my favorite part was yet to come. 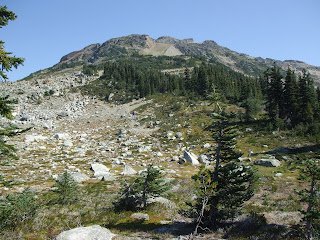 Khyber spits you out on a gravel road. Once out, head left to a cell tower, where it's only a two minute climb. I've heard that Babylon by Bike was overgrown and not really worth it. Let me tell you, IT IS! Some guys must have done some recent work on it because it was in prime condition. Loam, pine needles, steep section and some stunts - everything to keep you smiling from ear to ear. 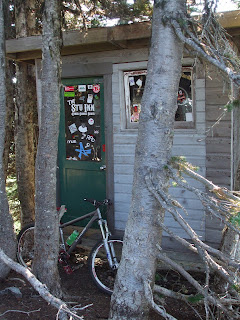 Last part is Tunnel Vision. Very different from the other two, with it being not very long, but fast. A few jumps and some nice features along the way make it a fun ending to what was a nice long descent with minimal effort to get there. The only problem is that it's so fast, you really never stop to take pictures. I'll take a bit more time when I ride it again; maybe even shoot a short video. 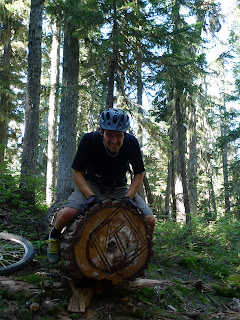 The entire ride is fairly quick. Not having timed it, my best guess is 30 minutes on the chair, 1 hour climb to the trail head and around 1 1/2 hours to get back down. Once done, we meet the family at lost lake and jump in the lake. Another killer weekend! 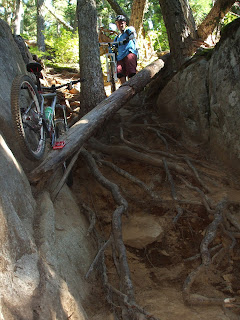