I'm jonesing. It's October and I can feel the shitty weather coming (until ski season starts anyway). Working at the university of BC, September/October is a crazy time of year. What was once a tranquil summer time campus is now a hectic bustling bee hive. I need to get out; I'll do virtually anything - before I go insane. 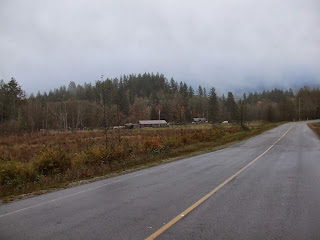 It's a last minute thing. I have no real plans or destination. All I have is a bit of time on this particular weekend (although I have to be back for a dinner party that Sunday night). So I grab my bike, pack up my gear and leave early morning. 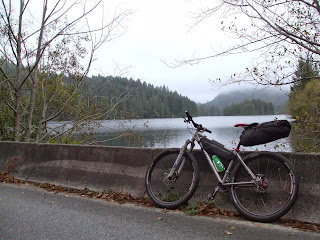 It's foggy and cold but I feel good. There are hardly any cars on the road as I quietly pedal to the ferries. The fog is surprisingly welcoming; it muffles all sounds. All I hear is the chain driving my gears and my tires whistling on the road. 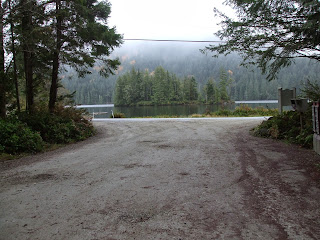 On the other side, looking at my map, I'm still not sure where to go. I see a few roads that intrigue me; hmm... I wonder what's there? Pedaling slowly, following this road, my mind goes blank. Almost in a coma, legs spinning, I feel strangely absent. It kind of freaked me out once I got out of it, I wasn't to sure where I was anymore, so I had to take my map out. Luckily I was on the road, so it was easy to locate myself. If I had done that in the back country it could have been bad news. Turns out I rode 20 kms and never realized it. Wow, that was intense. 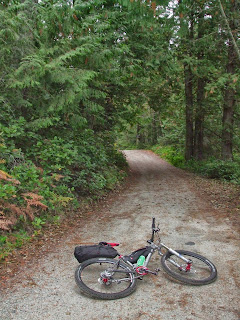 Now that I'm back on earth, I keep going. It's nice not having a preset route, you just wander, with no particular idea where to go. I'm looking around me but there's so much fog I can hardly see anything. I could be anywhere. My mind starts drifting again pretending I'm somewhere else in a far distant land. I feel kind of silly and juvenile thinking about it now but it was kind of fun drifting away like that. 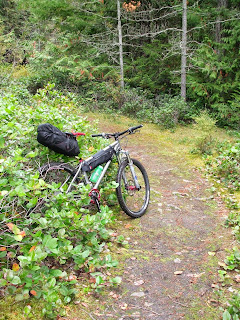 I get to a small village and stop there to eat lunch and buy some provisions for the evening. It's there where I talk to a few people and ask them if there's a good place to set up camp for the night. After a few suggestions, I decide to go nearby to a small lake 15 kms away. 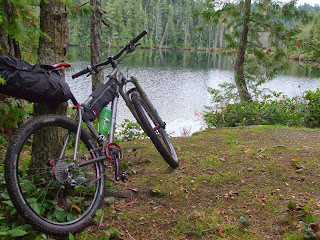 Around 45 minutes later I arrive at the lake. It's a beautiful ride on a gravel road covered with leaves. Once at the camp ground (which is closed for the season) I ride a bit around the lake trails to see if I can find a more secluded spot to set up camp. Unfortunately I find nothing, but the trails are fun and flowy with nice views of the lake. I spot some fish - next time I'm bringing my fly rod. 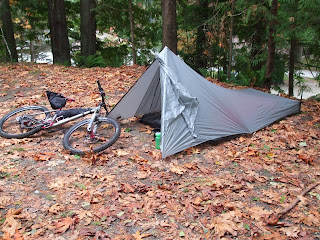 Back at the camp ground I set up my tent quickly, as it's getting late. I prepare supper and hit the sleeping bag early while reading the latest issue of Bike Mag. Next morning, I pack up my wet tent early for the ride back home. I'm craving a big breakfast, so I stop for bacon and eggs. I still have a bit of time, I'm riding much faster than yesterday . I'm so hungry, as soon as the waitress puts the plate down, and even though I was telling myself to take a picture for the blog, I'm already in it. That was GOOD! 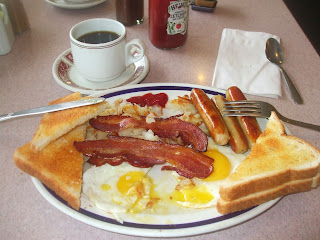 I'm happy I did this. Some of you may remember a post I did a few weeks back called Wake up. That clip kind of shook me up a little bit and it's pretty much what happened to me on this trip; one of the reasons I wanted to do it (well sort of). It wasn't all that exciting. Actually, it was kind of pointless, which was the point. Doing something just to do something. I like that. I came to the realization that I should stop pondering about what to do so much, where to go and most importantly I should stop talking about it. I should wing it like that more often. What's the worst that can happen? I may regret it sometimes I guess, but at the very least, I'll remember and that's a good thing. 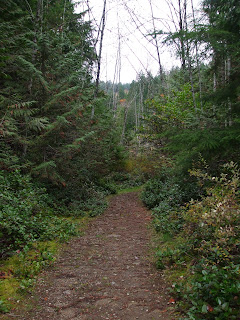 Posted by Nick Lemmel at 8:19 PM No comments: Links to this post